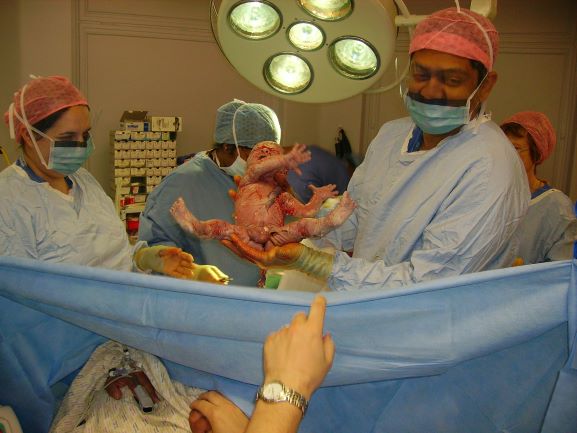 In Australia and many high-income countries, the rate of caesarean section (CS) is increasing. There is no evidence that higher rates of CS improve health outcomes, which raises concerns about overuse of the surgical procedure (ACOG et al., 2014).

In 2000, 1 in 5 Australian women had a caesarean section. That rate is now more than 1 in 3 (AIHW, 2018). For women having their first baby in Australia the risk of CS is 37% (AIHW, 2020). Once a woman has experienced a CS, future vaginal birth is much less likely. In Australia, 7 out of 8 women will have a repeat CS for their next baby (AIHW, 2020). Therefore, preventing the first caesarean section (called a “primary CS”) is paramount wherever safely possible (ACOG et al., 2014).

Some have attributed the significant rise in CS rates to the increase in older and more obese pregnant women (RANZCOG – AIHW releases data on caesarean section in Australia). Indeed, age ≥35 years and obesity can increase the chances of health issues including high blood pressure, diabetes, and multiple pregnancies. Nevertheless, this change alone is unlikely to explain the magnitude of the rise in CS rates, nor the differences in CS rates in different settings (WHO, 2018).

What the research did

Fox et al. (2021) used routinely collected hospital data to analyse the main reasons recorded by clinicians for primary CS in Queensland Health hospitals. Nearly 100,000 women either having their first baby or having a subsequent baby after previous vaginal birth were included in the study. Women who had experienced a previous CS were excluded.

What the research found

The top two reasons women in Queensland public hospitals had a primary CS were: ‘abnormal fetal heart rate’ (23%) and ’primary inadequate contractions’ (23%). Medical interventions including artificial rupture of membranes (ARM), oxytocin augmentation or induction of labour, and epidural analgesia predicted CS for fetal heart rate concerns (as did obstructed labour). Where a primary CS was performed due to “inadequate” contractions, epidural analgesia, ARM, fetal stress, and oxytocin augmentation or induction were predictive factors.

So what does this mean?

An Australian study including 1.25 million reported women who accessed birth centre or homebirth had lower rates of oxytocin augmentation and epidural use. Maternal and perinatal outcomes by planned place of birth in Australia 2000 – 2012: a linked population data study | BMJ Open. The Cochrane systematic review found women receiving midwife-led care in a hospital setting were less likely to receive an epidural, although it appeared to make no difference to rates of induction of labour or oxytocin augmentation. Midwife-led continuity models of care compared with other models of care for women during pregnancy, birth and early parenting | Cochrane

Midwifery continuity of care models and out-of-hospital birth protect against overuse of medical interventions including CS. Universal access to continuity of midwifery care should be a national policy priority.

Australian Institute of Health and Welfare. (2020). Australia’s Mothers and Babies 2018 – In Brief. AIHW.

New Queensland research shows the top two reasons for birth by caesarean section and the common contributing interventions. Strategies that prevent the overuse of synthetic oxytocin and epidural for pain relief are needed to tackle rising caesarean rates. https://www.transformingmaternity.org.au/2021/03/the-two-most-common-reasons-women-have-a-first-caesarean-section/

One year on from the beginning of the #COVID19 pandemic: #BoatsonanOcean "This is the moment when everyone else will just see sunshine today but, for me, I know this is the beginning of it." https://soundcloud.com/user-491221439/boats-on-an-ocean/s-BjgVELLyojM